As an add-on to the project for my software engineering for AI class, I tried adding Grafana as a means of visualizing our telemetry (metrics) for our database instances, as well as our data ingestion services.

Grafana is an open source analytics and interactive visualization web application, but around the Internet it seems to be mostly used with time series data. It’s a nice all-in-one monitoring application to keep all the monitoring from different feeds and sources in one place. This is great for large production systems with many moving parts to keep track of - putting all the relevant charts, graphs, and meters in one place, rather than checking tens or hundreds of places. It’s even better when combined with alerts for when things go wrong.

In our project, we’re building a movie recommendation system for users, based on live Kafka stream of data from users watching and rating movies. In this long pipeline from stream to recommendations, anything could go wrong anywhere. It would be immensely helpful for debugging and monitoring system performance in production if we collected telemetry data about the various parts of our system, and better still collect it in one place. This motivated us to add a monitoring tool to our overall system.

Falling into the trap of beautiful graphs

Who doesn’t like beautiful graphs about metrics, especially in production ML systems? When we currently talk about observability and telemetry in systems, Grafana is often the tool that comes to be mentioned. Unfortunately I think a good number of people like me fell into this trap where we assumed that Grafana was a magic black box that would just produce amazing graphs and visualizations from our services in production. It turns out that Grafana only performs visualization - it assumes you have the telemetry data (most likely time-series data) stored nicely somewhere waiting to be visualized.

I’m not complaining, it does a great job at what it needs to do. But now I have to deal with another component, the actual telemetry collection process. This is where most roads point to using Prometheus, as our centralized all-in-one-place telemetry collection engine. Prometheus makes this entire process relatively easy and painless. For your applications and services that you wish to track, it asks only that you expose a HTTP endpoint providing the metrics you wish to collect at a single point in time. It then becomes Prometheus’s responsibility to collect data from that endpoint at a pre-specified collection interval.

That means that from the perspective of someone who already has a service or two up and running, to get metrics from those services into Grafana, you’d have to:

In this post we demonstrate how to set this all up for a couple of PostgreSQL databases, as well as a custom Python service, just to show the niftiness of being able to collect multiple metrics in one place. This is especially so given that the database and the Python service are hosted in different places, and have a different stack supporting them.

Specifically, in our example, we have three things we’d like to capture data about / from.

There are a number of reasons why we’d like to collect and visualize metrics for these services for our project (we’re not collecting it just for fun).

For our purposes, the telemetry data will flow in the following design.

Basically, for each ‘thing’ we’d like to collect data from, we expose a HTTP port. For the databases, since the databases by themselves can’t really do that, we use the Postgres Exporter service some kind soul already created to do that for us. It’s nicely packaged as a docker container, so all we have to do is specify the connection to the database and the port we intend to expose it on.

To run the Postgres Exporter service, create an environment file with the following variables. The latter two variables are optional, it allows to specify which port and endpoint you’d like to expose.

Then, docker run and you’re done!

For anything other than a database, Prometheus itself provides clients that perform the exposing of data on an endpoint. We added the Python client to our ingestion service to collect metrics about the number of new movies added, number of new users added, and the processing time for certain costly functions. We briefly describe some of them here. For example, we collect processing time metrics in the following manner:

Prometheus runs in a nice Docker container. To figure out where to ingest data from, it takes in a YAML file prometheus.yml. For better management, we store prometheus.yml at /var/lib/prometheus, and map this directory to a container directory in the container so that we can change the configuration on our host.

Our prometheus.yml file looks as follows. It defines three jobs, and for each job a scraping interval and an endpoint to scrape from.

Again, to start the Prometheus service we run the Docker container:

Now, we simply visit port 9090 on the machine to see the Prometheus interface.

More importantly, navigate to the Status > Targets tab, to verify that the metrics endpoints that you are consuming are available. You should see something similar the the following.

Now, we get finally get to run Grafana. To persist the settings and dashboards, we map the grafana directory of the container to a local directory.

Again, navigating to port 3000 should bring up the main Grafana interface.

To visualize data from any particular source, we have to first define a Data Source in Grafana. In this case, we can navigate to the Data Source tab and add a Prometheus data source. Simply add the details for connecting to the Prometheus service (we exposed the 9090 endpoint for Prometheus earlier).

Once we’ve added the data source, we can now go ahead and create a Dashboard for our ingestion service. Dashboards here work the same way as they do on most similar software (e.g. Tableau, Metabase). We can also import dashboards designed by others, but let’s make our own first.

In our newly created Dashboard, click anywhere to add a new Panel. In this Panel, we select our Prometheus Data Source, and enter a Prometheus query. In this example, we want to visualize the latency of our main Kafka record processing loop. For a more representative result, we take the 1 hour running average for latency, and get the graph below.

You can actually also obtain this same graph in the Prometheus interface directly. If we enter the same query in Prometheus, we get a pretty much identical graph, barring differences and axes and timezones.

We go ahead and add two more Panels for our ingestion service dashboard, so now we can a fairly satisfying dashboard that looks like we’ve done a lot of work.

I’ve added two other panels to visualize how many new movies and users we’ve added to our database from the Kafka stream since the ingestion service was started. It seems that we haven’t really added many new movies over the last 12 hours, but new users are trickling in at a relatively uniform rate.

One cool community feature of Grafana is that Dashboards are shareable. This is very useful since more often than not, we would like to track metrics similar to what everyone else is tracking - service loads, database connections, memory consumption etc. Making a dashboard from scratch also takes a bit of effort, so why not look around to see if someone has already made one? Here we demonstrate importing a dashboard made by someone else for visualizing telemetry data from our PostgreSQL databases. We’ll use the ‘Postgres Overview’ Dashboard, which contains most of what we need. Go to Import Dashboard, and enter the ID of the Dashboard, and fill in the rest of the details.

This should give us a relatively reasonable dashboard as follows.

That’s basically it. From here its a matter of iteratively determining which metrics you need for your service, adding new ingestion endpoints to Prometheus, and producing the required visualizations in Grafana. Naturally, imported Dashboards might satisfy most but not all of your needs, so more customization likely needs to be done. For example, in the above imported Dashboard, the data is aggregated over multiple databases. If we’d like to see the data for separate databases (as in the RDS and its read-only replica), then the Prometheus queries in the Panels will need to be amended. This is still an easier process than creating it from scratch.

Grafana reminds me of Metabase (which I described in a previous post) and similar Business Intelligence (BI) tools. Apart from performance differences (Metabase got a tad slow when I added too many panels or when the SQL queries were complicated), I think a key difference between monitoring tools like Grafana and BI tools like Metabase is the source of data and the expected value-add of these systems. In monitoring tools, the data sources are often real-time telemetry streams from the various moving parts of the system. These data sources themselves are also unlikely to have direct business value, but instead reflect conditions about how the system is running in production, not unlike measuring the temperature in a machine or in a factory or in your car to determine if it is overheating or not. The purpose of such monitoring systems is also to allow developers to respond quickly to problems in the system, or to provide useful feedback to improve models and systems.

In contrast, BI tools and visualization engines often use static data e.g. from data warehouses. BI data is also often looked at after-the-fact by analysts to determine potential business insights and therefore business value, as opposed to monitoring data which looks at real-time data to diagnose potential issues within systems. As a result, BI tools often come with many useful features built-in, such as recognition of common units e.g. currency.

There are a few things that I do like about Grafana. The first thing is probably the large community of plugins and dashboards there are available. It is likely that for any standard software that I wish to deploy, someone has already developed a dashboard and even a data exporter for it. It is far easier fine-tuning someone else’s dashboard to fit my needs than to build one from scratch. Another thing I like about Grafana is that its interface is quite simply and easy. It was easy to setup and run, add data sources, and get started creating our visualizations. Any complexity is conveniently outsourced to other parts of the pipeline e.g. my inability to come up with good Prometheus queries is not Grafana’s problem, but it’s Prometheus’s problem.

Not so nice things about Grafana

I think the key complaint that most people have about Grafana, looking around on the interwebs, is that the data storage component has been separated entirely from the visualization process. If you recall, this is why we brought in Prometheus earlier in this example. It’s a reasonable complaint - it may not make sense to run two or three extra containers just for monitoring a simple service that may only take up one container. In fact for this example, one might argue that visualizing the queries on Prometheus was all fine and good. Granted, you couldn’t have many graphs on one page and it didn’t look as fancy, but it may have well been sufficient for the job. In the end, I think it comes down to a matter of scale. Personally I quite like the separation between visualization and data collection, and I think I’ll keep it that way. 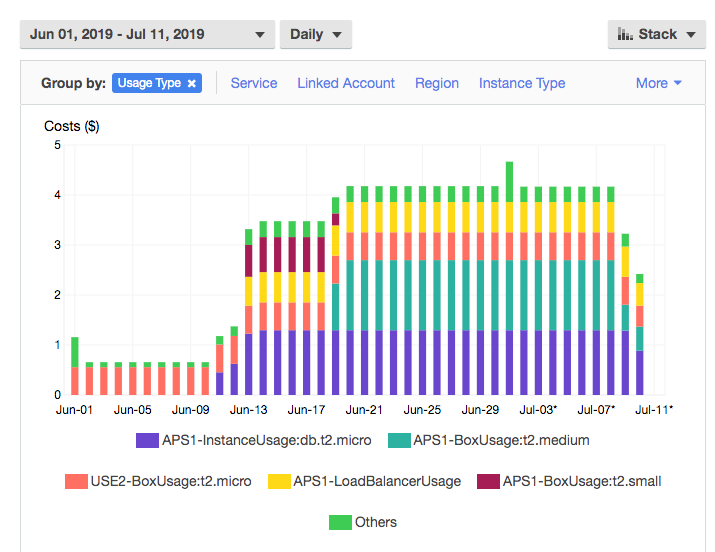 Or how to be a an absolute scrooge using AWS as a student who ran out of GitHub Educate funds. Full of funny practices, such as putting long-lived functions in Lambdas, turning off the production database when not in use, and scheduling ETL on the clock without triggers.

Documenting going down the rabbit hole after looking for a basic hypervisor.